There is much that is dreamlike about Tempo Manor. On a sunny summer afternoon when a slight breeze ruffles the reflections on the lakes, the happy visitor sitting in the gardens must resist the temptation of being transported back to a Victorian croquet party. The swaying of crinolines and excited chatter of long ago are abruptly dispelled by the splash-down of a family of ducks quacking appreciatively to their kind hostess for providing a snack on the lawn in front of the house.

Everything looks so natural, the trees and shrubs skirting the lake, the trim lawns and colourful borders, the climbing plants about the gables. Nature has played an important part in providing Tempo’s charms, but there is, too, much that is unnatural. The harmony of the setting is not accidental. It results from generations of hard work and loving care, and from a sympathetic response between architecture and gardening which is rarely rivalled in Ulster. How was this all achieved? Medieval Fermanagh was Maguire territory. One branch of the family, more anglicised than the rest and more prepared to play the Plantation game, held the lands of Tempo not only through the difficulties of the seventeenth century but almost to the end of the eighteenth. Then the estate was bought by a Londonderry merchant called Samuel Lyle in 1799, and he in turn sold it in 1814. The new owner was the distinguished Belfast banker William Tennent who, no doubt, regarded Tempo as a both a rustic retreat and a good investment. How much he used the property is not known, but certainly if he had plans for its enhancement, they were not begun at the time of his early death from cholera in 1832. His estate passed to his only surviving daughter, Letitia, and her husband James Emerson who assumed the name Tennent. Knighted for his government and colonial services, Sir James was a typically successful Victorian, an able administrator, a vigorous politician, a tireless letter-writer, and an energetic pursuer of anything that took his interest.

Sir James seems to have fallen for Tempo. Even in its overgrown and tumbledown state he could see its advantages. He probably read the Parliamentary Gazetteer and agreed with its author’s description of the surrounding countryside as ‘tumulated, hilly, partially mountainous, everywhere much diversified and prevailingly of agreement appearance’. Looking forward to the prospect of a comfortable and secluded retirement, Sir James and his wife seem to have determined about the middle of the century on a programme of land improvements and building renewal. It is their Tempo, cherished and developed by their descendants, which survives today. With sound business sense Sir James began with land improvements. As many as a hundred men were employed at one time in drainage works and cleaning the waterways. Attention was then turned to the demesne and the planting, or replanting of the screening tree beltings which were to provide shelter and privacy for the gardens. An eye witness of these works was Henry Coulter who arrived in search of material for his book The West of Ireland: its existing condition and Prospects which was published in l862. He was impressed: ‘The demesne of Tempo,’ he wrote, ‘is of unusual beauty, being richly planted with extremely fine old trees; and, besides a river which flows through its entire extent, the hills enclose three small lakes wooded down to the water’s edge. When Sir James came into possession of the demesne, it was in a wild and neglected state. The fine old timber had been allowed to suffer considerably from decay, the ground was overgrown with weeds, and sadly in want of drainage, and the lakes were choked with sedges and foul with decaying vegetable matter ….. for thirty or forty years it was little better than a wilderness’.

Having tidied the demesne, Sir James turned his attention to the house.

This was the old Maguire home part at least of which must have dated from the seventeenth century. Successive patchings and additions appear to have enhanced neither its stability nor its convenience. With characteristic assurance Sir James had its curiously irregular front recorded in water-colours, and swept it all away. He would build a new house, and to design it he chose his Belfast political associate, Charles Lanyon, senior partner of Messrs Lanyon, Lynn and Lanyon, architects, then the most fashionable country house designers in the north of Ireland. 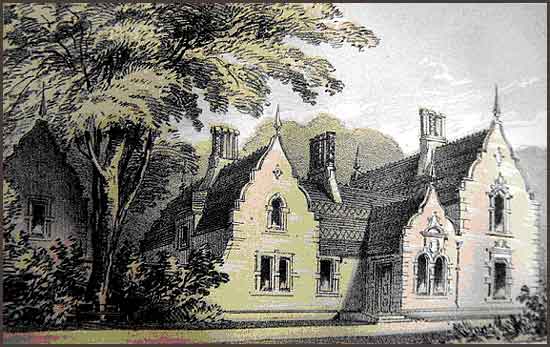 There was little difficulty in choosing a style for the house. Sir James was lord of the manor, so he must have a manor house, in this case a Jacobean manor with curly gables, mullioned windows and Dutch decorations. Henry Coulter thought the ornamentation ‘very tasteful, but not of an elaborate character’ and published a view. This shows that the original house did not include the north portion with the tower which was added almost immediately in l867. As a whole the house is deceptive; with its varied roof heights and informal facades it appears from a distance to be large and rambling. In fact it has a compact sensible plan with the entrance on the north west, and all the main rooms enjoying varied views of the gardens to the south. Similarly, there are various views of the house from different parts of the gardens, with the planting arranged to give subtle variations of screening and discovery. This interplay between planting and building is the great achievement of Tempo. The unity of house and garden seems to reflect the character of Sir James in his later years absorbed in study of the natural world. In l86l, while the house was being built, he published his Natural History of Ceylon. Like so many Victorians he was a great collector, and because of his colonial duties he had had a wide experience of plants and animals from different parts of the world. In the museum room, significantly part of the extra accommodation added with the tower in l867, the fossils, eggs, birds, insects, rock samples, butterflies, even an elephant’s tooth, attest to the range of his interests. The garden has its collections, too, and like the museum would have been seen by the Victorians not simply as a place of idle pleasure but as an opportunity for improving instruction. The design would have lent itself to distinct areas for plants of particular species or needing similar conditions. Within that framework each section would be arranged to make the best of scent and colour, the opportunities of light and shade, of formality near the house or wilderness some distance away. The rose garden, the rock garden, the water garden, the pinetum each had its place, and with a knowledgeable guide, a visitor could travel the natural world: Japanese maples, giant North American pines over a hundred feet tall, rock plants from the Swiss Alps, Gunnera like giant rhubarb from South America, even the rare blue poppies from the Himalayas.

It would be unfair to suggest that Sir James alone was responsible for Tempo. It has been the work of many. By the marriage of Sir James’s grand-daughter Tempo passed to the Langham family of Cottesbrooke in Northamptonshire, and it is now the family home. That the house, collections and gardens survive in such good order is owing to the dedication and care of the Langhams, most especially in our own time of Rosamond, Lady Langham and her late husband, Sir John. Tempo is still very much a private home, yet through Lady Langham’s generosity many have had the opportunity of sharing its delights, of following its leafy paths, of dreaming its dreams.

We're not around right now. But you can send us an email and we'll get back to you, asap.